There are many factors to consider for anyone looking to live abroad, and one of the most important ones is affordability. It’s true that the EU may not be the cheapest place to live, but you might be surprised at how affordable some EU countries are! This list features the 11 cheapest EU countries to live in.

If you want to move to a country in the European Union where the cost of living is cheaper than in most EU countries, then this list is for you. Although it includes the cheapest EU countries, it’s good to know that most countries have both expensive and inexpensive areas. More touristy places, for example, will be more expensive.

That being said, the cost of living may be a big factor, but it’s also important to research other factors as well before moving there. Some other important things to consider before moving abroad are visas, health care, culture, religion and the spoken language.

But without further ado, here are the 11 cheapest EU countries to live in.

11 cheapest EU countries to live in

Located in Eastern Europe, Bulgaria is an authentic country with a rich history, beautiful mountains, nice beaches and friendly locals. It’s a safe country with a lot of diversity and it may also be THE cheapest place to live in the EU.

The cost of living in Bulgaria’s capital, Sofia, is 54% cheaper than in the U.K. However, if you go to smaller towns or Plovdiv, which is the country’s second-largest city, it will be even lower. This makes Bulgaria one of the countries with the lowest cost of living in Europe.

Compared to other EU countries, living in Poland is pretty cheap. This country is a very diverse destination with beautiful national parks, medieval towns and interesting history. It’s home to bustling cities like Krakow, the Tatra Mountains with their beautiful lakes and the world’s oldest functioning salt mine; Wieliczka.

Poles are very hospitable people and accommodation costs are low in this country. It’s good to know that food and public transportation are also cheap, but that the cost of gas, clothing and electronics is similar to more expensive European countries. Nevertheless, Poland is still a beautiful and very affordable place to live in the EU!

Romania is one of the cheapest countries to live in the European Union, and it’s also one of my favourite countries in Europe! With its picturesque towns like Brasov, enchanting forests and stunning castles like Peles Castle or the infamous Dracula’s Castle, this is an underrated country that has so much to offer. If you’re a lover of nature and the outdoors, then you will love this country!

Compared to other EU countries, the cost of living in Romania is pretty low. On top of that, it’s also a dream destination for digital nomads. Romania is one of the countries with the fastest internet speed in the world.

Portugal is one of the most popular countries among expats and digital nomads, and it’s true that because of this, real estate prices have been rising in recent years. This being said, Portugal is still the cheapest Western European country to live in.

It’s good to know that famous cities like Lisbon and Porto tend to be more expensive compared to the rest of Portugal. There are other great places to live in Portugal though, so don’t let this put you off!

This beautiful country has warm and sunny weather most of the year, and it’s also home to bustling cities and beautiful beach destinations. Some other things that make this country a nice place to live in are the delicious dishes from Portugal, Porto and wine, and the welcoming locals!

Hungary is another safe and affordable country with a lot of things to see and do. This country has plenty of natural, cultural and historical places to visit, and Budapest, the capital, is one of the prettiest cities in Europe. On top of that, this city is also one of the cheapest cities to live in on the continent.

Most expats who live in Hungary live in Budapest, but if you work online, and would rather not live in a city, then the Northern shores of Balaton are another nice option.

If you’re looking for stunningly beautiful and affordable countries to live in in Europe, then Slovenia may be the country for you. With its mesmerizing landscapes, breathtaking lakes and majestic waterfalls, this Central European country is the perfect place for lovers of nature.

What makes it even better is that Slovenia is known to be a stable country with low crime rates and welcoming locals. It’s good to know, however, that Slovenia is more expensive than other Eastern European countries. This being said, it’s still cheaper than the U.S. and most countries in Europe.

Another one of the cheapest European countries to live in is Croatia. This country is famous for its stunning waterfalls, fascinating historical sites and amazing coastline. It’s one of the most visited tourist destinations in the Mediterranean and it’s easy to understand why, as there are many beautiful places to discover here.

When it comes to living in Croatia, it’s good to know that this is one of the safest countries in Europe. It’s a great country for expats and digital nomads, that is – if you can handle the bureaucracy.

Ah, Italy – where do I even start! Living in this country is a dream for many people. Some of the world’s most famous sights can be found here and let’s admit it: Italian food is one of the best foods in the world. There’s an abundance of things to do here, from hiking in the dolomites to relaxing by the ocean or visiting ancient ruins.

The good news is that living in Italy is actually pretty affordable – though it does depend on where you live. The main cities, like Rome and Milan, for example, are actually pretty expensive. If you don’t mind settling in smaller towns or in more rural areas, then it’s perfectly possible to live quite cheaply in this country! Just make sure you do some research on the best places to live in Italy.

The Czech Republic is another affordable country in the EU. That is – with the exception of Prague – which is actually quite an expensive city. There are, however, plenty of other beautiful places to live in the Czech Republic. So if you’re okay with living in a smaller city or town, like Ostrava or Olomouc, then the Czech Republic might be the perfect country for you.

This country has got a lot to offer, from beautiful national parks with unspoiled forests to vibrant cities full of palaces and churches. If you’re a history buff or like visiting castles, then the Czech Republic might also be the ideal relocation country for you!

Read: A Guide for Hiking from Hrensko to Pravcicka Brana in the Czech Republic

Slovakia is somewhat more expensive than its neighbour Hungary, but it’s still one of the most affordable countries to live in the EU and Europe. This beautiful country is famous for its mountains, lake beaches, charming villages and delicious food.

Compared to countries in Western Europe or the U.S., living costs are low in Slovakia, so by moving here, you’ll be able to make the most of your earnings.

That being said, Slovakian people are known to be a bit standoffish. However, once they get to know you, they do tend to open up!

With its interesting culture and rich history, Latvia is not only a cheap EU country to live in, but it’s also a pretty fascinating one! This is one of the last countries in Europe to join Christianity, and Paganism is still very much alive in Latvia.

All in all, if you want to live in Europe without the high cost of living, then Latvia might be the country for you!

And voila, these were the cheapest EU countries to live in! I hope you found exactly what you were looking for in this post and that it gives you a better idea of which EU countries are pretty affordable.

After researching a place’s affordability, it’s important to research other important factors as well before moving there. Some of the most important things to consider are the culture, language, health care and visas for the country.

Cheapest European countries that are not in the EU

There are some pretty amazing countries to live in Europe that are not in the EU as well. You can find these below. Some of the countries listed (Albania, Montenegro, and Turkey) have applied to join the EU, so they may join one day.

You may also like:
– 22 Cheapest Asian Countries to Visit
– 21 Movies About Nomads That Will Inspire You

39 Useful Gifts for Hikers: For Every Budget...

21 Movies About Nomads That Will Inspire You

36 Gifts For Beach Lovers: For Every Budget...

22 Cheapest Asian Countries to Visit in 2022

15 Beautiful Palaces in Asia That You Can... 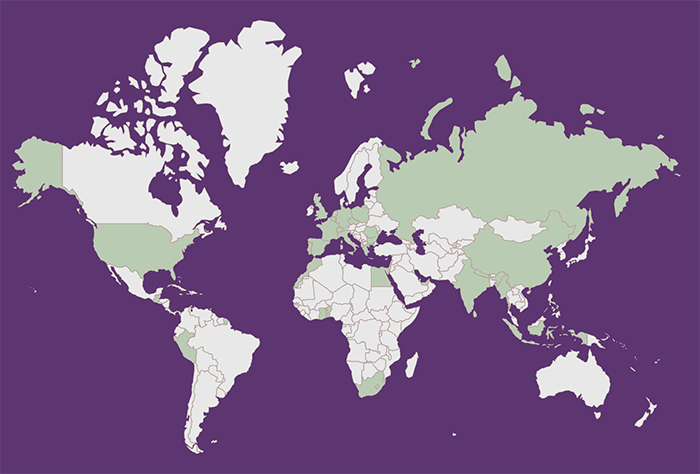