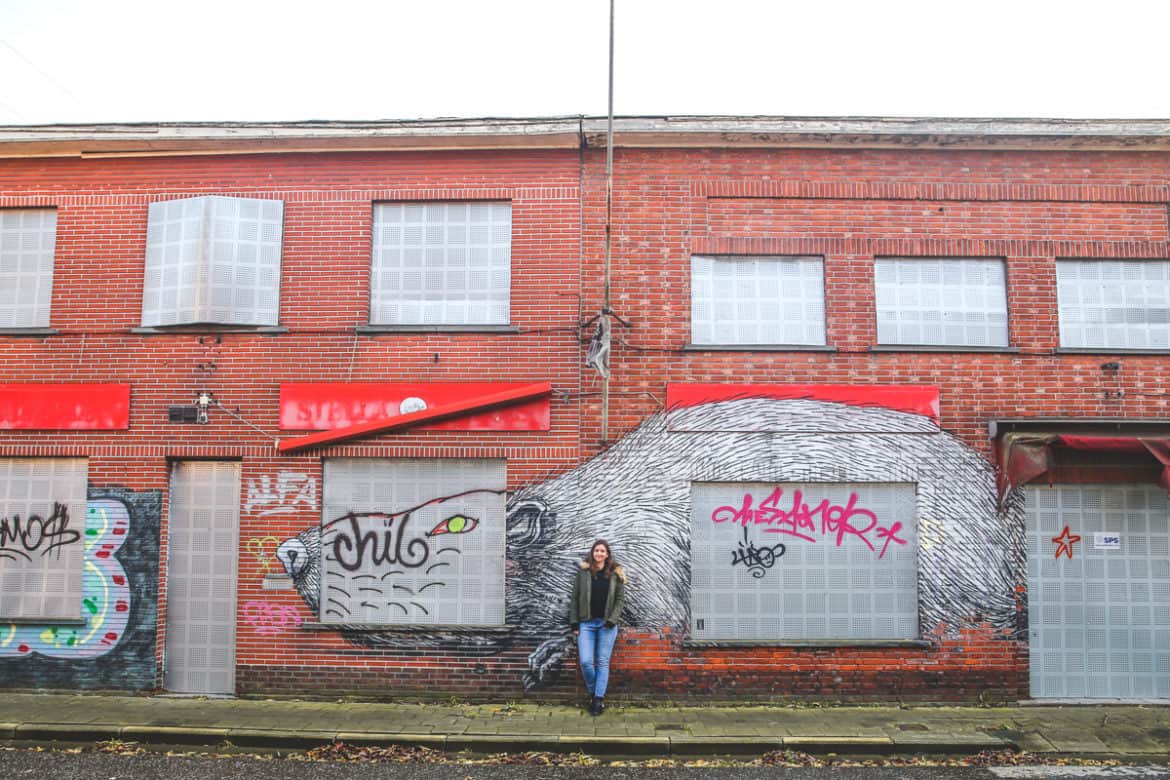 Imagine a town full of empty houses abandoned by their owners, silent streets without any cars and graffiti art on every corner. Nature is slowly taking over in Doel, a Flemish town located in between the harbour of Antwerp and the nuclear power plant of Doel, Belgium. If you want to get an idea of what the world would look like if humans were gone, this is the perfect place for you!

Although Doel is called a ghost town and it looks pretty abandoned too, there are still 15 to 20 people living here. So make sure to be respectful if you decide to visit this place.

A visit to Doel

I’ve visited Doel for the first time in 2012. The town’s strange, post-apocalyptic atmosphere had left a big impression on me, so I decided to return.

Some things have changed since my last visit. For starters, when you’re entering Doel, there’s a lever blocking the way for cars. You have to put your ID inside a slot in order to enter. Another option would be to park here and continue by walking.

Another thing that has changed are the metal plates on every door and window. These were installed in order to keep vandals and squatters from entering the buildings.

Just like on my first visit to Doel, it felt as if I was walking on the set of an apocalyptic movie when I wandered around the empty streets. If it wasn’t for the graffiti and the occasional signs of life, Doel would give you a pretty good idea of what the world would look like without us. Pretty fascinating if you’re asking me!

I started my visit at the cemetery and church. The latter is still open for special occasions, like weddings and funerals. On the left side of the church, the Hooghuis is located. This is a beautiful house built in 1613 and inherited by the famous Flemish painter Peter Paul Rubens.

As I continued wandering around the abandoned streets, I came across an inhabited house from time to time and wondered what it would be like to live here. A little later, a lady left her house and greeted me as I passed by carrying my huge camera. I felt a little embarrassed and wondered what the inhabitants of Doel would think about all these “intruders” visiting their decaying town. The lady didn’t seem to mind though and I continued walking around the empty streets.

I passed abandoned bus stops and gas stations, colourful graffiti walls, closed cafés and decaying houses. Before returning home, I made sure to catch a glimpse of the power plant of Doel, which you can see from the town’s last street.

Why was Doel abandoned?

I’m sure you’re wondering why a lively town counting more than 1.000 inhabitants during the seventies was abandoned. It’s not a super exciting story with big disasters and people fleeing (luckily though) but an ongoing political battle.

The reason why people left Doel is because of expansion plans for the harbour of Antwerp. Doel was standing in the way so it became a target for demolition. In 1999, the residents could leave their house voluntary in exchange for a payout but some residents refused to leave and successfully fought for their village. The government wasn’t able to execute its plan to destroy Doel and the topic became an ongoing political battle.

Although plans to destroy Doel were postponed, within the next decade, more and more residents left the village. There was no police and a lot of vandalism took place, so they didn’t feel safe anymore. This is something that has changed in recent years though and Doel is a lot safer now.

What about the future?

Although it’s not a final decision, new plans for the expansion of the harbour of Antwerp have been made and according to these plans, Doel would be able to remain.

We’ll see what happens, but it’s great news for the remaining residents who fought so hard to save their village.

How to get to Doel, Belgium

The easiest way to reach Doel is by car. It’s a half an hour drive from Antwerp, but you can also get there by bus:

8 Amazing Places to Visit in Lesotho

Learning About Voodoo in Ouidah, Benin

Buchenwald Concentration Camp: How to Plan Your Visit

Very interesting to me. Makes me think to go there and compare the present situation with the one i still have in mind from my stay at the Doel power supply station in 1976.
I do enjoy reading your blog, as it gives me the feeling to go and travel by myself.

Interesting, I’ll go and visit it finally. And at least we have now a picture of the beautiful Ghost living in Doel !!!!

Haha 😀 It’s definitely worth a visit!