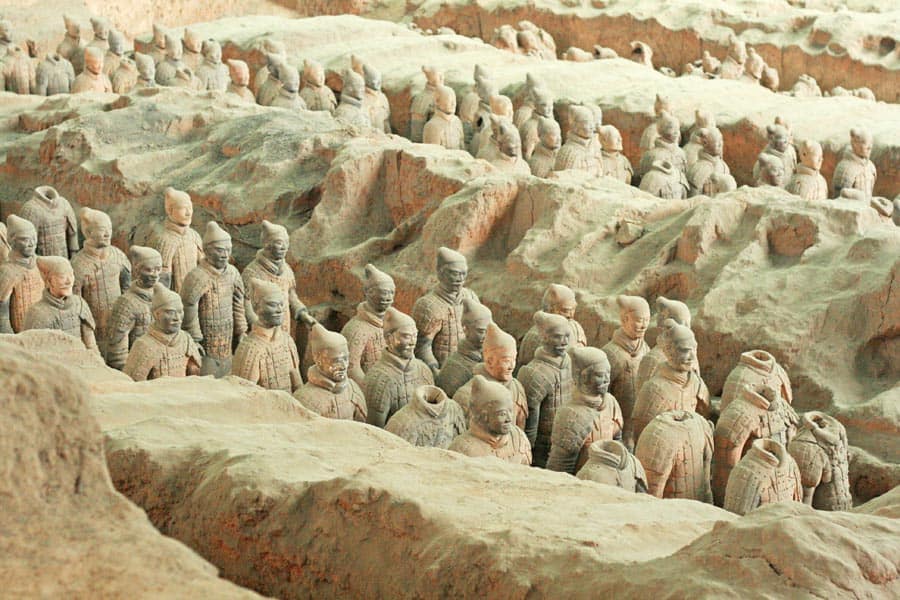 The Terracotta Warriors of Xi’An, China

The Terracotta Warriors of Xi’An are said to be the greatest archaeological discovery of the 20th century. It speaks for itself that I was really excited to visit them! Standing in front of this immense army was an amazing experience and I wasn’t disappointed although the place was packed with crowds, which took away some of the magic.

Nevertheless, this museum is a must-see for every ancient China enthusiast and it’s one of the best things to do in Xi’An.

You may also like: What is China Famous For? 30 Interesting Facts

The Terracotta Warriors of Xi’An, China

When three farmers were digging a well in 1974, they stumbled upon some ancient pieces of terracotta. Unsure about what they had discovered, they brought some of them to the District Lington Museum. Not long after that, an archaeological team began excavating the site. Turns out the farmers had found the 2.200-year-old army of warriors that had been buried with the first Qin Emperor to guard him in the afterlife.

Over 8.000 warriors, 600 horses, and 130 chariots were discovered so far, with many more waiting to be unearthed.

It’s hard to grasp that each of these life-size models has distinct facial features. Each one of them was cast from real-life soldiers. And it’s even harder to grasp how an estimated 700.000 workers worked for nearly three decades… before being killed to keep them from revealing the army’s location.

Even today, the excavation of the warriors is still ongoing and the tomb of the Emperor remains unopened.

The Terracotta Warriors and Horses Museum is located 30 km (18,6 mi) outside of Xi’An, in the Lingtong district. It’s easily accessible by bus and it takes about one and half hours to get there from Xi’An.

What you’ll see at the museum are figures that have been reassembled, the terracotta warriors themselves have been smashed. The original warriors were also armed with real weapons and painted in bright colours.

The museum consists of three pits that are open to the public:

Tip: Even though it would make sense to start your visit at pit 1, I’d recommend saving this one for last. You’ll find shattered terracotta warriors in pit 2 and seeing the final product at the end will make you appreciate this archaeological treasure even more.

Read more about China:
– Beijing: Top Things to See and Do

Beijing: Top Things to See and Do

What is China Famous For? 30 Interesting Facts